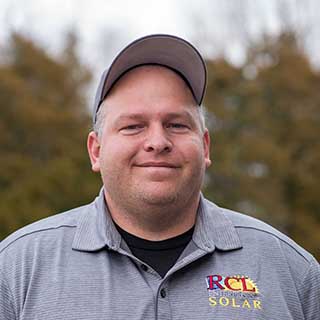 John Williams is the Solar Service Manager here at RCL Enterprises Inc. and has over 15 years in the construction industry. After graduating from Woodstown High School in 2002, he began working in the construction industry. In 2004, he found himself installing a roof with RCL Vice-President Paul LaRoy. After the job, John was asked to work on another with Paul and, before long, he started working full-time with the company. While growing in his position within the company, solar became more in demand. Johnny soon began to apply his hard work and dedication to helping the solar division at RCL. With more than 10-years experience working in the solar and electrical industry, he is an integral part of not only RCL's solar division but of the company overall. His daily tasks range from solar site assessments, to site analyses, project drawings, solar installations, solar repairs, and much more. John prides himself in the quality of work that he provides and is a self-motivated, highly dedicated worker with a great attitude. He was born and raised in Salem County and has been a lifelong resident. During November of 2015, Johnny announced his engagement to Ms. Tiffany LaRosa. Outside of work Johnny enjoys spending time with his fiancee and kids, camping, boating, and other outdoor activities.